A new $30 3.5 hour training DVD for CrazyTalk Animator, out now from Reallusion. It’s quite possible that some of these may be on YouTube, but you do get them here in HD so they’re presumably more suitable for watching on a TV. You also get three exclusive project-based tutorials, based on “masterworks” (presumably made by pro animators) along with the props, FX and project files they used. Reallusion members are currently getting a discount on the DVD, and to get this discount you need to click ‘upgrade’ from your list of purchased software in the Members section, then scroll right down to the bottom of the list of upgrades. 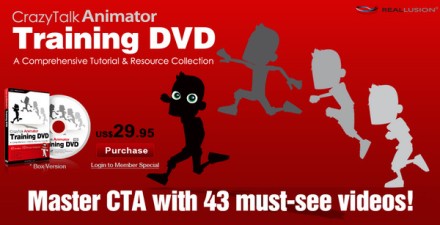 Those without the space for a Kinect to operate properly (usually eight feet from you to the sensor) may be interested in the $30 Nyko Zoom wide-angle lens for the Kinect.

“The Zoom is a wide-angle lens attachment that fits over the Kinect, changing how it sees the room. With a wider angle, it can see more laterally, but doesn’t have as much depth. According to Nyko, this means the Kinect needs up to 40 percent less space than without the Zoom. Because it’s just a set of lenses that fit over those on the Kinect, it doesn’t need any power or complex installation; it just slides on.”

PC Mag has seen it in operation at an Expo, and reports that it’s set to ship “later this year”… meaning it might coincide quite neatly with the Kinect-enabled iClone 5? From what PC Mag says, the problems with bystanders don’t seem likely to affect single-person motion-capture. Hopefully IPIsoft will factor in the new wide-angle possibilities as a simple toggle button in its software.